Case: I
ON Resistance is reduced with increasing the width of the channel as shown in the figure. W1 < W2, and L is same. 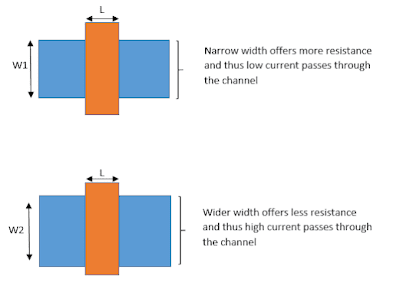 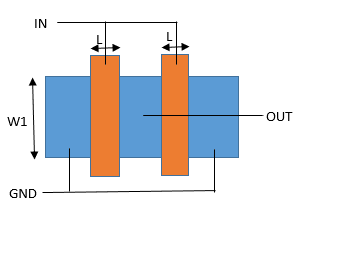 Case II
By changing the channel also we can change the driving strength!!!……. But for technology node channel length is constant, then how can channel length be changed?
For a given technology node there will be  more than one channel and this details are provided by fab people. I mentioned on channel length in my previous post Technology/Process Node
There raises a question when we need to upsize the drive strength?
When the load capacitance is more than the internal capacitance as a result charging time increases and delay increases, to reduce the charging time/delay we have to upsize the cell.

Clarification:
Lets us consider a CMOS design which has both nmos and pmos.The height of the cmos(standard cell) is equal to the sum of Vdd’s widht, pmos channel width, diffusion spacing between pull-up and pull-down transistors, nmos channel width and width of Vss metal layer. A clear picture was shown below. Thus changing the width of the channel in pmos or nmos effects the height of the standard cell 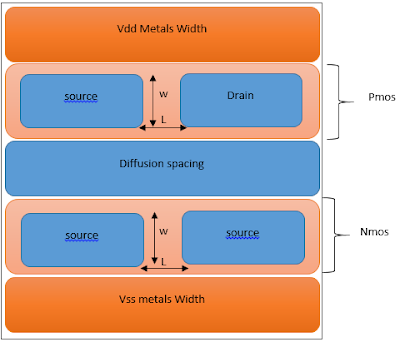 Faults list in design are categorized into sub categories. Faults class are mainly divided into Testable (TE)–> Faults can be tested by some patterns. Untestable (UT)–> Faults foe which no pattern exits to detect the faults Testable Faults : There are four sub category under TE. DETECTED(DT) POSDET(PD) ATPG UNTESTABLE(AU) UNDETETED(UD) Detected ( DT) : The Faults which are detected during the ATPG process are categories under DT det_simulation(DS): The faults detected when the tools performs simulation det_implication(DI): The faults detected when the tool performs learning analysis POSDET(PD) : The Possible detected, faults includes all the faults that fault simulation identifies as possible detected posdet_testable(PT): Potentially detectable posdet faults.With higher abort limit we can reduce the number of these faults posdet_untestable(PU): These are proven ATPG untestable and hard undetectable faults. ATPG_UNTESTABLE(AU) : This fault class includes all the faults for which

Faults list in design are categorized into sub categories. Faults class are mainly divided into Testable (TE)–> Faults can be tested by some patterns. Untestable (UT)–> Faults foe which no pattern exits to detect the faults Untestable Faults: Are the faults for which no pattern exit to either detect or possible detect them. These faults cannot cause any functional failures. And so the tools excludes them while calculating the test coverage. Types of Untestable faults are Unused (UU) Tied (TI) Blocked(BL) Redundant Faults (RE) Unused (UU) Any floating pins not used in the design come under UU faults The unused faults class includes all the faults on circuit unconnected to any observation point Tied (TI) This faults includes faults on gates where the point of the faults is tied to a value identical to the fault stuck value Blocked (BL) Due to tied logic in the design few faults are blocked and these are categories into Blocked faults. By adding the observable test point we can in