In semiconductor physics Group IV( in IUPAC Notation it is Group 14) contains Carbon (C), Silicon (Si), Germanium (Ge), Tin (sn), Lead (pb), Flerovium (Fl), all this elements contains 4 electrons in its outer shell nothing but four valence electrons. Out of all this elements Silicon (Si) is widely used in fabrications of chips because of following advantages.

By adding an impurity conductivity of material can be increased and depending on the impurity added we can have two types of semi-conductors
N-type Semiconductor :
When the group V element is added to the intrinsic or pure semiconductor (silicon or Germanium), the resulted product is said to be an n-type semiconductors. The group V elements are phosphorus, arsenic, antimony and this elements have five valence electrons. When Phosphorus is added to silicon, it forms four covalent bonds with neighbouring silicon atoms. The fifth valence electron of phosphorus atom does not involve in formation of covalent bond and this electron is free to move in structure. As the group V elements donates a free electron, these elements are called donors. With small addition of impurity (phosphorous) provides millions of electrons which are majority carrier in n-type semiconductor 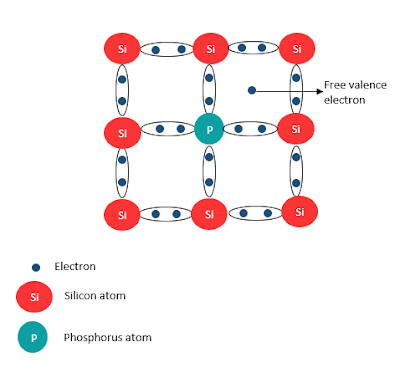 P-type Semiconductor
When the trivalent impurity or acceptor impurity added to Silicon (Group IV), the resulted product is said to be p-type semiconductors. The group III elements are Boron (B), Gallium (G), Indium (In), Aluminium (Al) and these elements has three valence electrons. When Boron in added to Silicon as impurity, three covalent bonds are formed with three neighbouring silicon atoms and in fourth covalent bond, only silicon atom contributes one valence electron, while the boron atom  is in short of one valence electron. Thus the fourth covalent bond is incomplete with shortage of electron and this missing electron is called hole. With small addition of impurity (boron) provides millions of holes which are majority carriers in p-type semiconductor 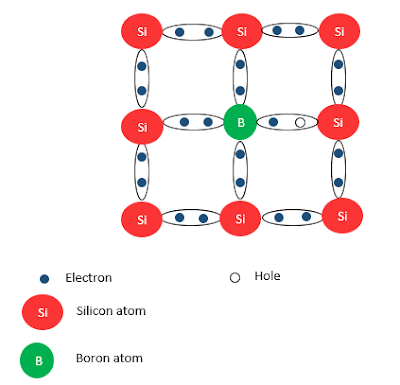 Behavioral modeling is the highest level of abstraction in the Verilog HDL. The other modeling techniques are relatively detailed. They require some knowledge of how hardware, or hardware signals work. The abstraction in this modeling is as simple as writing the logic in C language. This is a very powerful abstraction technique. All that designer needs is the algorithm of the design, which is the basic information for any design. Most of the behavioral modeling is done using two important constructs: initial and always. All the other behavioral statements appear only inside these two structured procedure constructs. The initial Construct The statements which come under the initial construct constitute the initial block. The initial block is executed only once in the simulation, at time 0. If there is more than one initial block. Then all the initial blocks are executed concurrently. The initial construct is used as follows: initial begin reset = 1'b0; clk = 1'b1; end or initial

Scan cell is one of the DFT technique , to test the sequential circuits in the Asic/Soc design. Normal D flip flop are converted to scan flip flop, if the tool meets the following criteria Clock of the flip flop must be controllable The set/reset of the flops must be inactive during the shift mode. D flip flop ==> Scan cell Once the all the flops in the design meet the above two rules the tool will convert the d flops to scan flops by adding a mux as shown in figure above. Then the tools will stitch the scan cells into a scan chain according to the design requirements. Scan chain When Scan Enable is 0 (SE=0), all the scan chains in the design will be disconnected and the flops are connected to comb. logic When SE=0 When Scan Enable is 1 (SE=1) , combinational logic will be bypassed and all scan cells will be connected to form a scan chain When SE=1 When SE=1 , patterns are loaded to the scan chains and the data from the comb logic are captured